What are the topics covered this week? There’s Softbank liquidating its stake in Cruise, automotive mosfets from Nexperia, a Mannerisms Fable, the increasing industry chip capacity, the question of the Japanese ownership of Toshiba…

5. Softbank Vision Fund sells Cruise stake to GM
GM is buying the Softbank Vision Fund’s stake in Cruise for €2.1 billion. It will also put another $1.35 billion into Cruise which had been pledged by Softbank. GM will end up with 80% of Cruise. GM bought Cruise in 2016 for a price thought to be between $500 million and $1 billion. In 2018, SoftBank invested $900 million in Cruise and said it would invest another $1.35 billion when Cruise’s autonomous vehicles were ready for commercial deployment, potentially bringing its stake to 20%.

4. APEC week: Nexperia releases electro-thermal models for automotive mosfets
Nexperia has released electro-thermal models for some of its mosfets, many of them automotive qualified. It “developed these models in close partnership with a Tier 1 OEM whose requirements could not be satisfied by any others currently available”, according to the company. “Simulation models for mosfets usually include a limited number of device parameters modelled at typical operating temperatures. Nexperia’s new models capture the thermal interdependency of the complete set of device parameters across -55 to 175°C.” The models are in PET (precision electro-thermal) LTspice format. Reverse diode recovery time is included, as is “device EMC performance”, according to the company, which did not add further details. 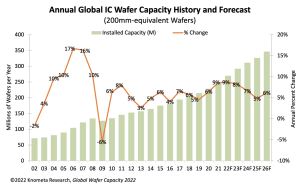 3. Capacity expansions won’t cause chip glut, says Knometa
In 2021, IC manufacturers responded to widespread shortages by increasing capacity 8.6%, says Knometa Research, which was the highest rate since 8.0% in 2011 or 10.4% in 2008. For 2022, an 8.7% expansion of capacity is expected, followed by 8.2% growth in 2023. Capital spending for fabs and equipment, expressed as a percent of semiconductor revenue, was at 25% in 2021, the highest rate since 2001 when the ratio was 26%. In the past, very high spending-to-sales ratios usually indicated too much capacity was being added and a market correction was coming soon. In 2001, capacity utilization rates tumbled sharply from 2000 when chip demand crashed.

2. Fable: The Game-Changer [Mannerisms]
Here’s a circuit which changed the industry. Developed very largely without the knowledge of management and launched on the market in 1964, it revolutionised IC design. 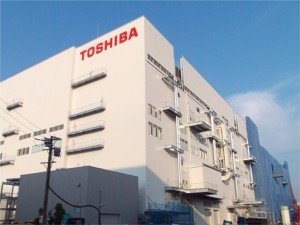 1. Crunchtime for Toshiba
This week could determine the future of Toshiba – whether it stays under Japanese ownership or gets sold to private equity. A shareholder vote on Thursday could support a group of activist shareholders including Effissimo Capital Management and 3D Investment Partners of Singapore, Farallon Capital Management of San Francisco and Oasis Management of Hong Kong who want to force a sale of the company, or it could back Toshiba management to see off the activists and continue to run the business their way. Shareholders will vote on two proposals: one, from Toshiba, asks them to support a restructuring of the company into two parts – broadly split between devices and infrastructure – the other, from the activists, calling for the company to reconsider alternative options including a sale.

The Queen’s corgis comforted her in her last hours

The You season four trailer is here – and this time, it’s set in London